The following is based on a great article published by Ian Leslie on 3rd July 2020.

Close friends are important – but research shows that building networks of casual acquaintances can boost happiness, knowledge, a sense of belonging and more leveraged financial results.

In 1973, Mark Granovetter, a sociology professor at Stanford University, published a paper entitled The Strength of Weak Ties.

It went on to become one of the most influential sociology papers of all time.

Until then, scholars had assumed that an individual’s well-being depended mainly on the quality of relationships with close friends and family.

Granovetter showed that quantity matters, too.

One way to think about any person’s social world is that you have an inner circle of people whom you often talk to and feel close with, and an outer circle of acquaintances whom you see infrequently or fleetingly.

Granovetter named these categories “strong ties” and “weak ties”. His central insight was that for new information and ideas, weak ties are more important to us than strong ones.

Granovetter surveyed 282 Boston-based workers and found that most of them got their jobs through someone they knew.

But only a minority got the job through a close friend; 84% got their job through those weak-tie relationships – meaning casual contacts whom they saw only occasionally.

As Granovetter pointed out, the people whom you spend a lot of time with, swim in the same pool of information as you do.

We depend on friendly outsiders to bring us news of opportunities from beyond our immediate circles – and so the more of those acquaintances we have, the better.

As the coronavirus changes our routines to interact with fewer people on a daily basis, we shrink our network of important weak-tie relationships.

The coronavirus pandemic may have a direct impact on people’s weak ties, and the benefits they reap from them unless they engage more in what has become the new face-to-face – online conferencing.

Companies that have been forced to change working practices by the crisis may end up making a permanent shift toward home-working and virtual workspaces.

Although workers stand to benefit in many ways, including increased flexibility, one possible downside of this change is that it can shrink our social networks.

For new increased advocacy, information and ideas, weak ties are more important to us than strong ones

Encounters with weak ties can be good for our mental wellbeing, too.

When Gillian Sandstrom was living in Toronto as a graduate student in psychology, she often had to walk between two university buildings, passing a hotdog stand on the way. “I’d always smile and say hi to the hotdog lady,” she says. “We never even had a conversation, but I felt recognised, I felt connected – and that made me feel good.”

That episode inspired Sandstrom, now a senior lecturer in psychology at the University of Essex, to investigate the extent to which people derive happiness from weak-tie relationships. She asked a group of respondents to keep a record of all their social interactions over the course of several different days. She found that participants with larger networks of weak ties tended to be happier overall and that on days when a participant had a greater number of casual interactions with weak ties, say, a local barista, a neighbour, a member of yoga class – they experienced more happiness and a greater sense of belonging.

Even seemingly unimportant encounters, like buying lunch from the same familiar face each day, can lift your spirits.

Lockdown is making such encounters rarer for all of us. Weak-tie interactions happen when we are out and about, particularly when we’re taking part in an activity of some kind, like singing or cycling.

A 2016 study, for which psychologists recruited respondents from Italy and Scotland, showed that regardless of nationality or age, people who were members of groups such as sports teams or church communities, enjoyed an increased sense of meaning and security. And the more groups of which they were members, the better.

“Sometimes it’s harder to talk to people we know well because those conversations come with an emotional burden,” says Sandstrom. “Weak-tie conversations are lighter and less demanding.”

By engaging in a wide variety of conversations with weak ties people can learn about how to cope with the various difficulties of life.

They are also a source of novelty, at a time when the days can all feel the same. Sandstrom shared a story about a colleague who has a weekly video chat with her family. “She says they’re running out of things to say, because nobody’s doing anything right now.”

As Granovetter’s work showed, we get much of our new information from weak ties. That provides stimulation but also, in a time of uncertainty, guidance on how to behave. 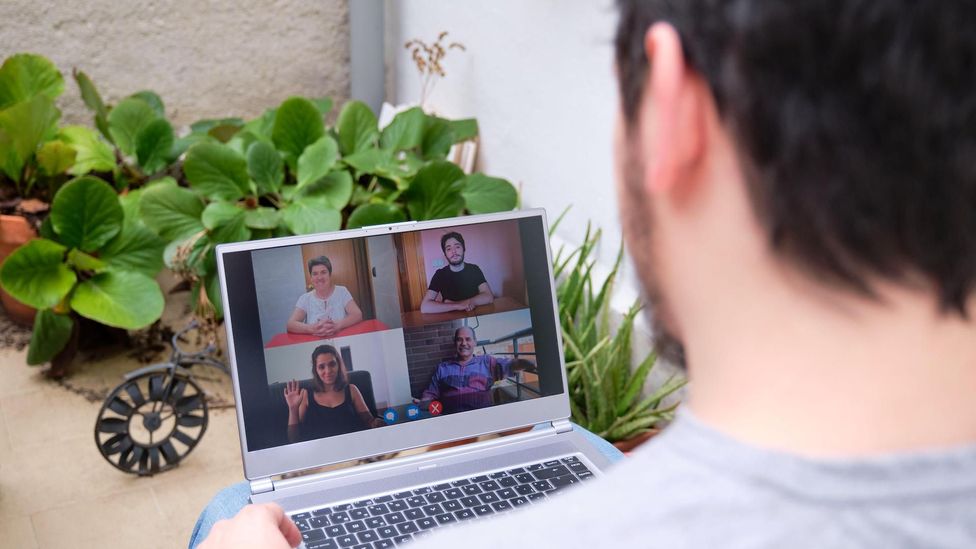 As we spend more time interacting with only strong-tie relationships, we begin to miss out on lighter conversations that can be less demanding and burdensome.

For all these reasons, we should continue to try and find ways to cultivate weak-tie relationships, in lockdown and beyond. Even under conditions of social distancing, our more distant friends are important to us. “We’re all curious to see how others are coping, what they’re doing, to help us figure out how to behave,” says Sandstrom.

Social media, she points out, is a useful substitute for weak-tie conversations. We can use it to reach out to people we don’t know well for: light, but meaningful interactions. She adds that we can also engage in more weak-tie-style interactions with our strong ties, checking to see how people are without engaging them in a full conversation. The goal, says Sandstrom, is to let others know you are thinking of them without asking for a great deal of time, energy or attention.

After this pandemic has passed we should take care to rebuild our networks of casual acquaintances. We can learn a lot from talking to people we barely know.